Misima is a transformational opportunity for Kingston Resources.

Kingston Resources released a maiden Pre-Feasibility Study for the Misima Project in November 2020. The PFS confirmed the potential to develop a technically robust, large-scale, long-life, low-cost operation delivering gold production of 130,000oz per annum at forecast life-of-mine (LOM) all-in sustaining costs (AISC) of A$1,159/oz over a forecast 17-year mine life.

The PFS is based on the redevelopment of the brownfields site of the former Misima gold mine, which was operated previously as a successful 5.5Mtpa Carbon-in-Leach (CIL) open pit operation by Placer Pacific, producing 230kozpa over a 15-year production history.

Kingston plans to leverage off this strong production history and construct a new 5.5Mtpa CIL treatment facility and modern infrastructure on the footprint of the historic mine, establishing a new standalone, long-life gold mining and processing operation underpinned by two major ore sources – a cut-back of the existing Umuna open pit and an expansion of the existing pit at Ewatinona in the Quartz Mountain area.

The scale and quality of the Mineral Resource and Ore Reserve, together with the brownfields nature of the Misima Project, the extensive mining and processing history, the relative softness of the ore and simplicity of the process flowsheet all give Kingston a high degree of confidence in the technical and commercial viability of the Project as the foundation for a long-term Asia-Pacific gold operation.

The Misima Gold Project is an exploration and development asset with significant scale underpinned by a 3.6Moz gold Resource and a 1.35Moz gold Reserve. It also hosts a number of exciting exploration targets. Kingston is the first company to focus on recommencing gold production at Misima since Placer Dome ceased its operation in 2004, having successfully produced 3.7Moz over a 15 year mine-life.

Misima Island is located 625km east of Port Moresby in the Solomon Sea. Gold was discovered on the island in 1888 with small scale underground mining continuing until WWII. Placer Dome Inc (Placer) commenced exploration in 1977, with production beginning in 1989. Misima was operated as an open pit gold mine from 1989 to 2004, producing 3.8Moz at an average cost of US$218/oz.

Kingston’s drilling has been focused on delivering to its strategy of identifying near-surface ounces to deliver ore feed for the early years of operation into the Misima mine plan while access to the main Umuna orebody was re-established via a pit cut-back.

This led to the successful identification of Ewatinona as a 200koz starter pit for inclusion in the PFS.

Kingston has also identified a number of further target areas to continue to deliver on this strategy:

The Misima Gold Project comprises two main deposits at Umuna and Ewatinona, and multiple reconnaissance exploration targets along and adjacent to the 12km strike length of the Umuna Fault Corridor that hosts the historical Umuna deposit, and Quartz Mountain area that hosts the Ewatinona deposit. 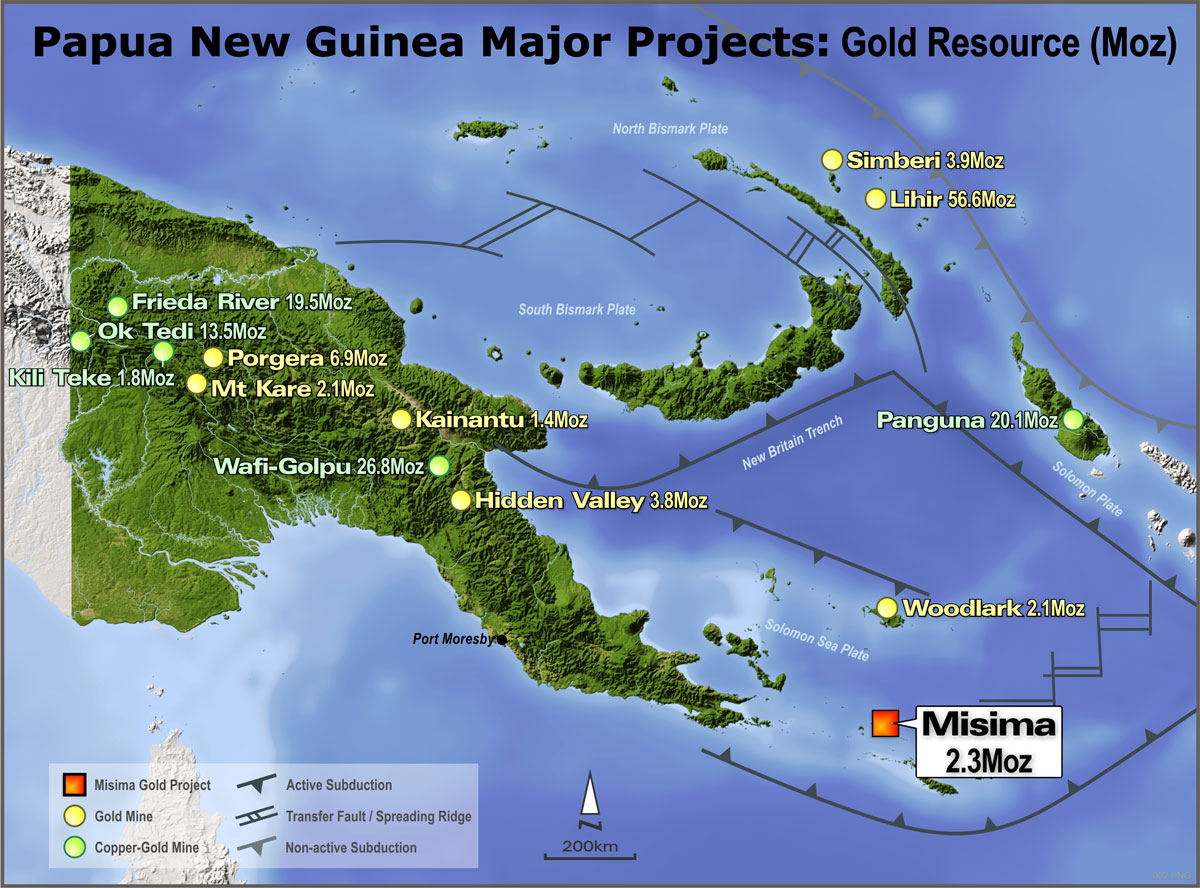 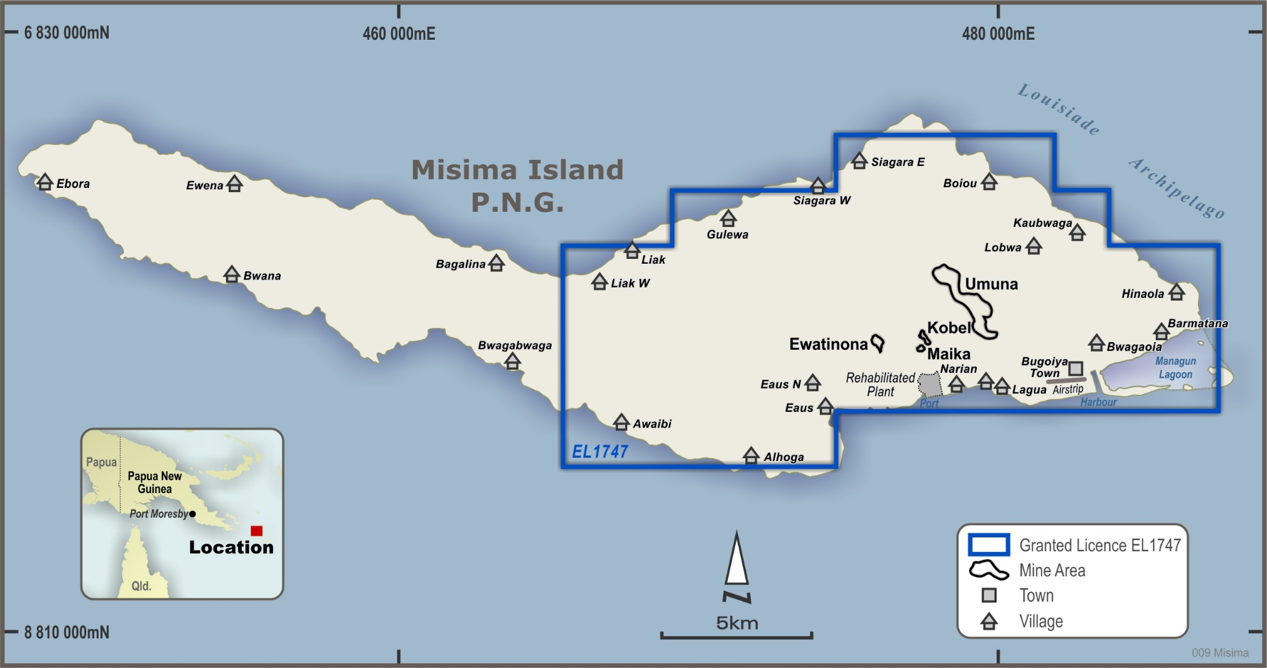 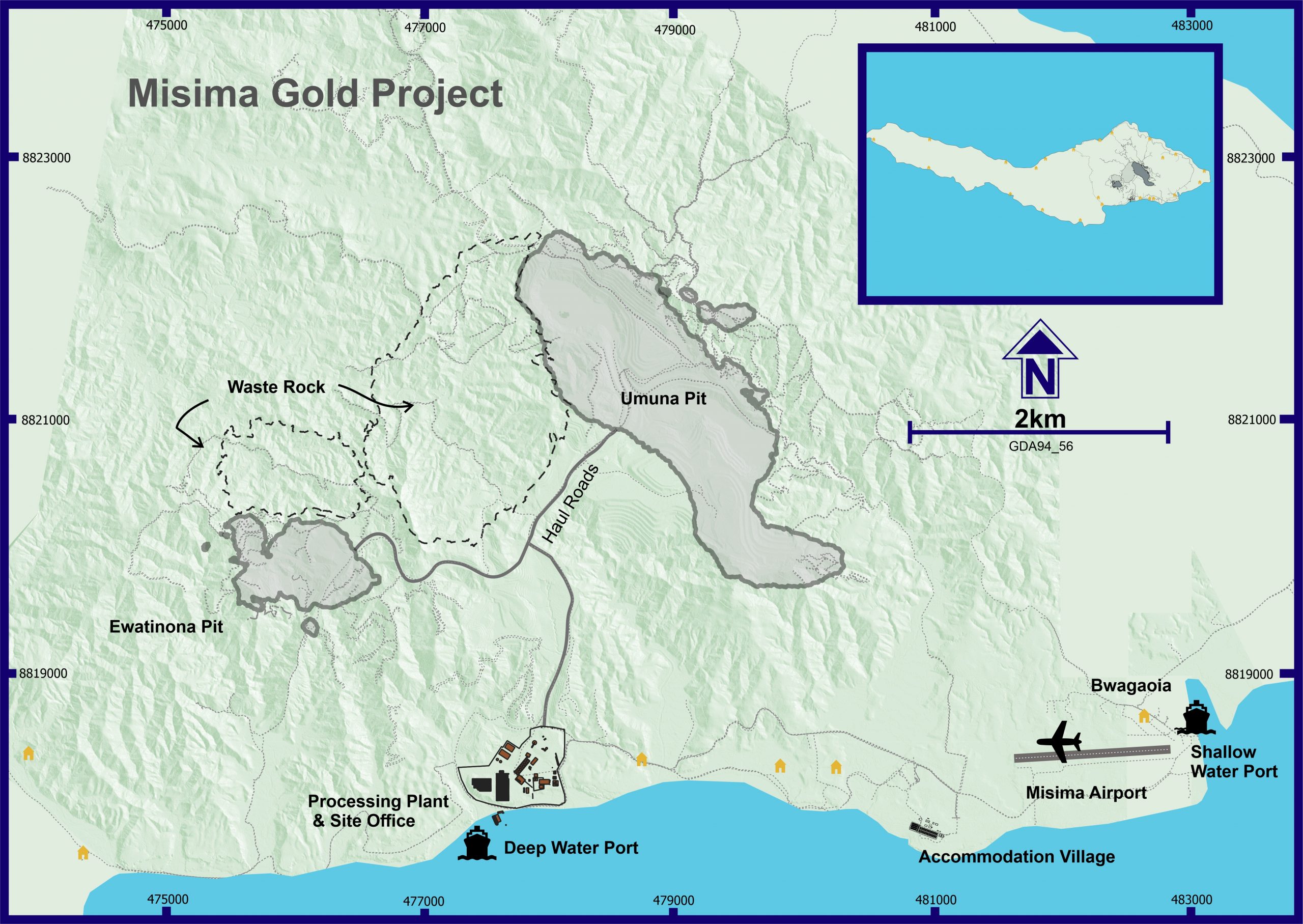 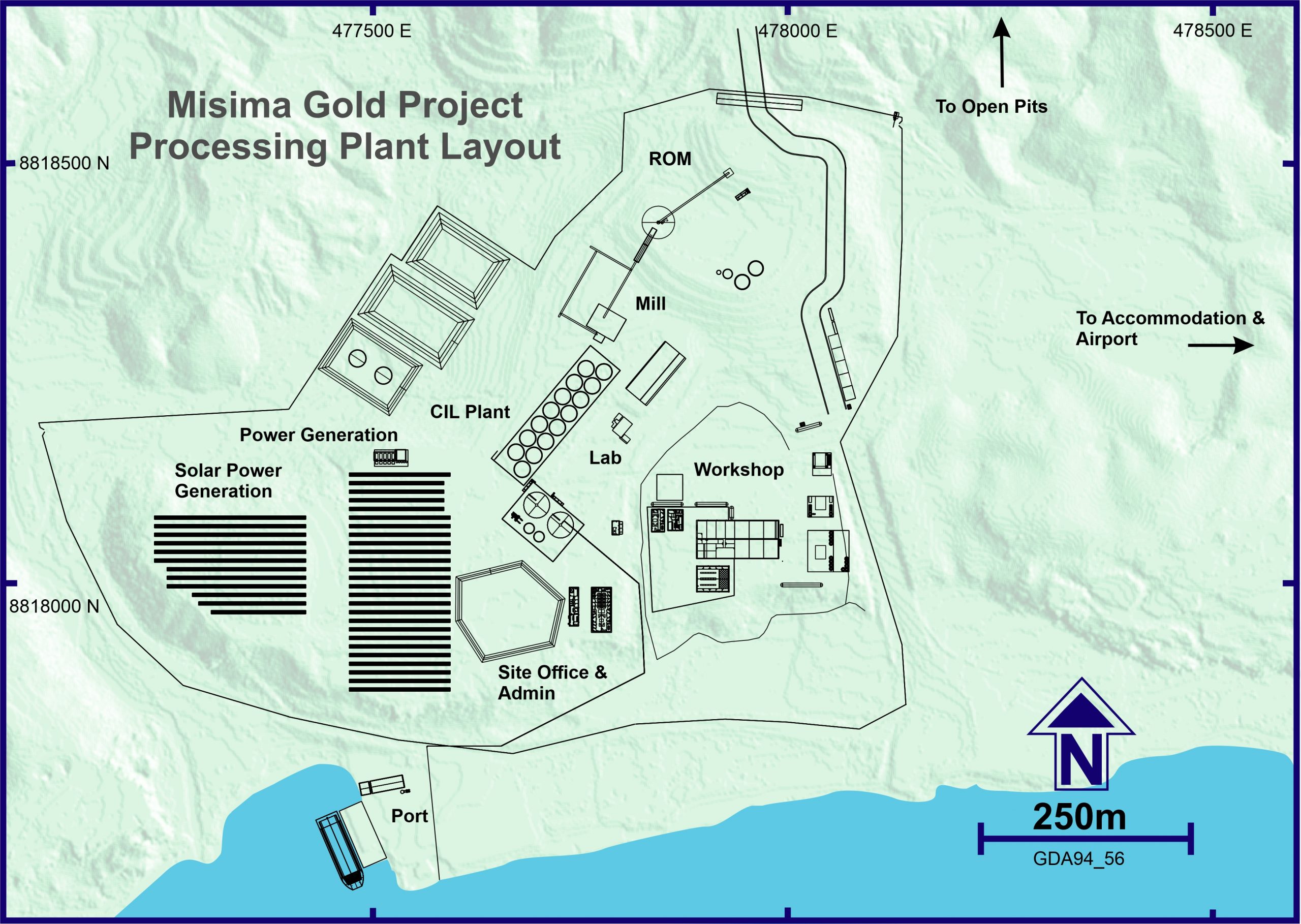 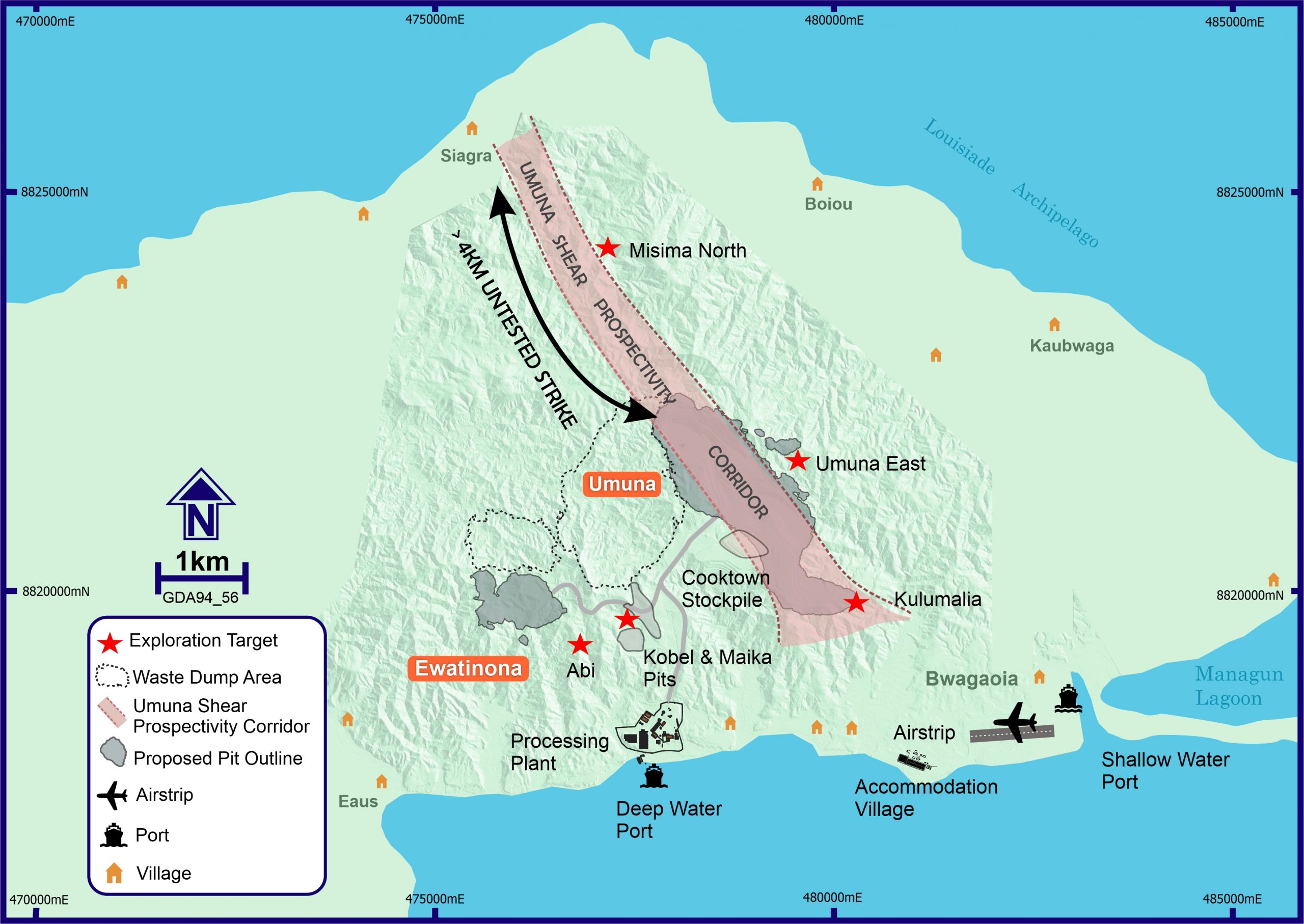 Misima Island forms part of the Louisiade Archipelago which is a continuation of the Papuan Fold Belt of the Papuan Peninsula offshore eastwards through the Papuan Plateau. The oldest rocks on Misima are Cretaceous to Paleogene metamorphic rocks, which can be subdivided into the western Awaibi Association and the younger overthrust eastern Sisa Association that is host to the gold and copper mineralization. The two associations are separated by an original thrust fault with later extensional activation.